I’ve been reexamining the Circle Trigon Aggressors lately, and their 1947 rendition, before they quickly turned into a telephone-game version of the Soviets, is a little strange(r).

They range from “normal” formations like conventional triangular infantry divisions (three regiments, three battalions per regiment) to “I see what you’re doing” small, tank-heavy armored divisions that resemble Soviet tank corps/divisions from the time period to slightly offbeat ones like their motorized/mechanized divisions with somewhat odd mixes of organic infantry and tanks , to their specialized airborne and cavalry divisions to, finally, the light division.

Light divisions are divided into two brigades of four battalions each. The division and even brigade headquarters have very little in the way of support or weapons, being mostly there as administrative/command formations. The eight battalions are very large (consisting of five companies of infantry with the usual company-level support weapons) and contain an organic battery of four 75mm field guns.

The light division was not meant for high-intensity warfare and, in the “storyline” was disbanded after the first failed Circle Trigon campaigns. Given my liking of “strange” unit formations, I found the light division somewhat interesting.

My latest Sea Lion Press blog article is on one of my favorite Cold War footnotes, the Circle Trigon Aggressors.

One serious proposal for a standing “UN Legion” got me thinking. How would it compare to its most likely [conventional] opponent? The UN Legion (highly unlikely to be deployed in its entirety) would compare on the high-end to a Light OPFOR (conceived around the same time) mechanized force.

Kenneth Pollack’s Armies of Sand, and its thesis predecessor, “The Influence of Arab Culture on Arab Military Effectiveness”, is fascinating not just for its core claim, but also in how, culture aside, politicization and underdevelopment worked in theory and practice.

The three can easily blend together. Praetorianism can be followed by commissarism as the winner of a power struggle consolidates, and commissarism and palace-guardism can be tied as the regime and country blur.

Palace-Guardism appears to be the least worst of the options, because in many cases an internal threat is far more urgent and far more credible than an external one, and because the common separate palace-guard forces (think the Republican Guard) are frequently benchmarked against the regular army and thus serve as the strongest conventional force.

Pollack’s description, which he backs up with evidence and case studies from several heavily politicized armies, is that politicization frequently leads to wildly uneven performance and affects the politically vulnerably upper ranks far more than it hits the lower, more obscure, or safe lower ones. Sometimes it can be downplayed, particularly in commissarist systems, if the regime lucks into a few high-ranking officers who are both militarily capable and politically friendly. And it often doesn’t need that many (For instance, a sample Light OPFOR Expeditionary Army needs only one army and three to five division commanders)

It’s an interesting study, as overly politicized armies will exist as long as politics and armies do, and it shows both the similarities and differences in every incarnation of it.

I’ve long had a strange love of the “OPFORs”, those exercise-fodder wrestling heel countries, and an even stranger desire to read documents that were hundreds of pages long and written in field-manualese for fun. So it’s no surprise that my collection of un/declassified documents grew bigger and bigger.

After my latest finds, I decided that the time was right to share them, so I made an official post detailing the “OPFOR Volume 3” and containing the access at Baloogan Campaign.

I had to collate them. In part because all of them were just too big to fit into one folder effectively, and in part because, even if I could handle the size, it would be too “jumbly”. Thankfully, I was able to come up with three categories. The first was “fake countries, the OPFOR manuals” I’d used in the first two volumes. The second was specific intelligence assessments on real countries at the time-ie, the famous FM 100-2 manual series on the Soviet Army. The third was miscellaneous commentaries that, even though most did apply to the “real countries”, didn’t quite have the same theme.

So they’re ordered and ready for your perusal.

My newest ebook, Paint The Force Red, is now released on Kindle. It can be purchased here.

I’ll admit this “e-pamphlet” was one of the most challenging to write. While my past ebooks have been written solely on my own whim, this was intended as a (somewhat) serious guide. I struggled with how much to add, and how rigid I should be. In the end, I settled on a cheap, brief guide to hopefully guide readers with the basics-after all, every country is different.

I am proud to present you my newest ebook. This, at times both a winking parody of and affectionate homage to the OPFOR manuals I’ve spent so much time consuming, is the Volunteer Force Threat Brief.

It is available on Kindle here.

My love of useless graphs and a desire to do some practice with Excel led to me creating this simple chart on the fake exercise punching bag-I mean nations. 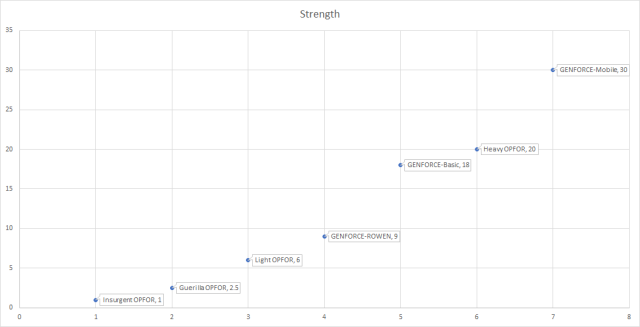 (For information on the OPFORs in question, see my posts on the subject at Baloogan Campaign. )

Now for the “data” (quotations deliberate). This is based on wild guesses and gut feelings, is oversimplified, and only deals in “conventional” threats. Quibbles include.

I did not include any “Hybrid” opponents, nor did I include any historical comparisons. These are purely in relation to each other.

The book is intended as a late Cold War version of the classic Defence of Duffer’s Drift and is styled as such. The action is evenhanded, detailed, and possibly a little over-detailed. But here’s what sets it apart. Instead of trying to move away from its inherent artificiality, it embraces it completely.

There are very good reasons for this in the proper context-it’s meant to be educational and show the equivalent of a “battle” in the National Training Center in detail-this isn’t attempting to illustrate a full World War III or any other story in any other sense. It’s not like I think McDonough made a deliberate stylistic choice to focus the story entirely on a completely artificial engagement. It was just the nature of a Duffer’s Drift-style tale.

However inadvertedly, the book nonetheless is the closest in-print work to the kind of artificial OPFOR thriller I talked about wanting to see-making no pretentions about being anything more than what it is, and having a sense of humor that stands out in an otherwise serious genre.

Now, as my writings on both here and Baloogan Campaign have shown, I have a fondness for the “OPFORs”, the representations of the enemy from the Circle Trigons to the present. 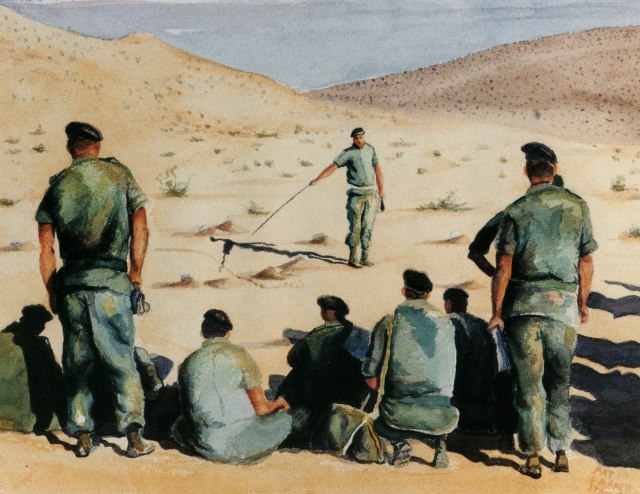 This painting is of Krasnovian soldiers and is definitely not one of OPFOR soldiers in Fort Irwin.

But another part of it is, ironically enough, in literary terms. Because of the very “fake” quality of the concept. The exercises themselves of course were not meant to win Nobel Prizes in literature. The OPFOR states were meant only as an openly artificial foe in an artificial fight.

Note the statement “openly”. Having slogged through an Augean stable of bad 198X World War III fiction, I can say that seeing something that’s just openly, plausibly, unconcernedly, an artificial creation feels refreshing in its honesty. Given how many bad works of fiction both prop up the Soviets (or other opponent) as a similarly artificial pop-up target in practice and are treated by their fans as something otherwise, there’s a part of me that just wants to see:

“A Krasnovian Tank Army is approaching. Are you a bad enough dude to stop the Krasnovians?” Cue the Abrams/T-80 slugfest.

Plus I think it adds a bit of humor, a knowing wink. And the genre badly needs works that lighten up a bit.