The “Ring defense of Baghdad” that was the ideal goal of Saddam in the 2003 Iraq War was illustrated by a later CIA illustration as this: 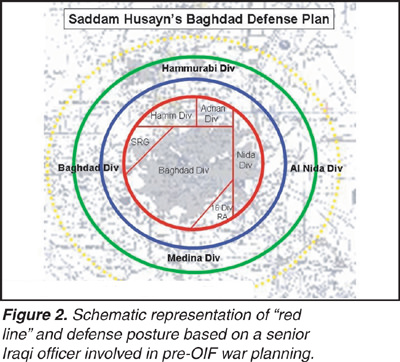 The “rings” were a British-influenced line system. Yellow is the initial deployment of forward screening forces, green the initial line of main forces, blue the first fallback line, and red the final one, where the survivors would switch to a positional defense after a fighting withdraw.

In practice, the shambolic 2003 army facing an overwhelming opponent was unable to implement it in any meaningful way. Even in theory, it uses the mobile heavy divisions as part of the ‘anvil’ rather than a separate Stalingrad-style “hammer”. Yet it remains an interesting example of a plan to have a large corps-sized unit defending a very large city.

This site uses Akismet to reduce spam. Learn how your comment data is processed.