Arcade, one of the Marvel villains ideal for one story, yet utterly unable to work in anything beyond it. 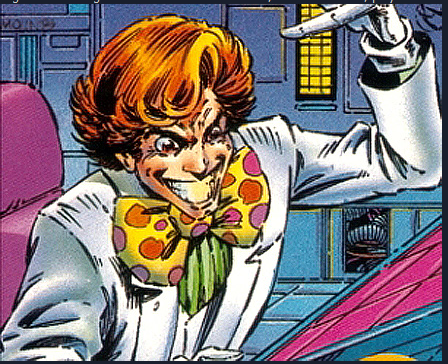 Arcade, for most of his existence, was/is a normal human in a bad 70s suit and giant bow tie who builds deathtrap amusement parks called Murderworlds and has an inexplicable ability to capture superheroes and plop them in there. Appearing in the second-rate title Marvel Team-Up, by all means he should have been a one-issue wonder who would be “lucky” to be a victim of the Scourge, a character created to eliminate “embarrassing” villains.

Instead, the legendary Chris Claremont liked the character and used him as an X-Men villain, and he became a B/C-list supervillain, even earning a place in Marvel Ultimate Alliance.

There have been multiple attempts to make Arcade a “serious” threat, the largest and most recent being the Hunger Games/Battle Royale ripoff Avengers Arena. None have worked. How could they work? It takes so much effort to force a character whose gimmick is ridiculous even by comic-book standards that one might as well make a new character or use someone more appropriate.

Thankfully, the version that I call “Classic Arcade” is an ideal ‘filler’ villain that almost any low-mid level superhero can face. The amusement park gimmick can make for some interesting visuals, and Arcade rarely facing the heroes directly means his reappearances aren’t quite as contrived as-well, everything else about him.

The Ultimate Alliance appearance uses Arcade well, with his presence being an excuse to have a carnival level and some extra-hammy voice acting.

Even crossovers can work-there is nary a Marvel crossover I’ve come up with that doesn’t involve the other crossover characters being tossed into Murderworld.

This site uses Akismet to reduce spam. Learn how your comment data is processed.